New power for the Madras Layout

I designed the Madras layout to be switched with an SW type locomotive, but did not have one that was ready to go with sound until now. I of course have a few small locomotives, but the are in varying stages of incompleteness and I was not looking to purchase another project. Recently BLI announced a SW1500 and they looked great, but were not really in the cards, so I had not grabbed one. I recently picked up a few projects and found myself with a little extra money, so I went ahead and purchased a Great Northern SW1500 painted in Big Sky Blue. I have tested it out on the layout and the unit runs well. I do need to fix a few spot on the layout as I am not getting great electrical contact in a few spots. This of course was was not a problem for the six axle power I was using before, but made switching hard as the unit was just to big. I am not going to do much to the unit other then maybe change out the hoses and use some Pan Pastels to add a little weathering. This will be for the layout and also a unit I would take to train shows. I do want to do a little programming with the sound and the speed curves, but all very minor items. 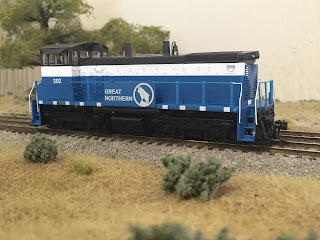 I have finally finished the ballast and weathering of track on my Madras Module. My next project will be to start adding some details, like joint bars, derails, clearance marks and switch stands. I also need to finish the buildings for these modules so I can complete the scenery around the structures. I am also thinking about adding a couple of backdrop sections to better complete the scene. 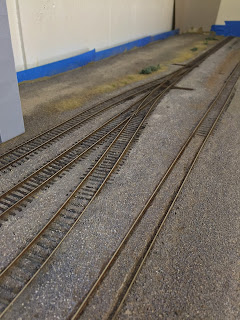